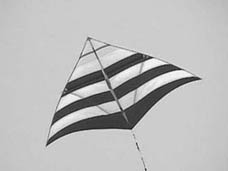 The flight lasted from about 12:00 (noon), until 21:10 in the evening. The ground crew of the day was made up of seasoned engineers, recreational pilots, and ham radio operators. Their ability to solve unanticipated problems with the tools and materials at hand contributed greatly to the success of this record attempt. My sincere thanks to all of you. This list includes: David Little and Carol Little (Carol runs the Kincardine Airport. She made sure that any aircraft straying into our part of the sky were contacted and moved out.); Gary Janssen, a high altitude kite flier from Pennsylvania; Michael Cannell, freelance journalist from 'Outside' magazine; Michael Hartwick; Gordon Moogk; Hans Dornbusch; Donald Matheson; Michael Dunn; William Spehr. David Hudak our meteorologist remained trapped in Toronto with meetings but did phone us the weather and weather updates throughout the day.
—Richard Synergy

That record stood until...

On September 23rd, 2014, four Australian kite enthusiasts flew a kite to a claimed 16,038 feet above the launch point at an airfield on a 50,000 acre sheep farm called Cable Downs in Western NSW, Australia. This was the venue for all our record attempts over the last ten years. It is a site remote from our homes in Sydney, 750 kilometers (466 miles) to the east of this dry and dusty place.

We have made this annual trek to Cable Downs in seven of the last ten years. There have been a number of other people involved, but the current team has been together for the last five attempts.

Mike Richards is well known in the eastern suburbs of Sydney as the kite man and runs a diverse business selling, building, and repairing kites. He is a jack of all trades but it's his expert kite building and flying skills that have had an enormous benefit to our high flying aspirations. The kites were conceived and designed by me, but Michael took my sketches and added his own ideas to make these kites powerful, stable, robust, and very impressive fliers.
—Bob Moore

There is an older record that, if officially recognized, would comfortably exceed any modern records.

(Thanks to Thomas-Michael Rudolph, Giles de Bertodano and Walter Diem for most of the following information)

The weather research station at Lindenberg is one of the few historical places in Germany related to kites. It is situated south-east of Berlin in the vicinity of the villages of Beeskow and Storkow. At Lindenberg on 1 August 1919 a train of eight "Schirmkastendrachen" reached an altitude of 9,740 m (31,957 feet), and that remains the world altitude record for a kite train. The lifting lasted from 6.26am until 0.11pm. The first kite had a surface of 10 m², the second 5 m² and the remaining six kites had each a surface of 8 m². The flying line, made of heavy gauge piano wire, was nearly 15 km long.

They flew single kites there, too. Found relatively recently (recorded in the table below) are details of the extraordinary flight of a single kite flown on 13 July 1938 to 7,358 meters (just over 24,140 feet, rounded off to 4 significent figures). The information was copied from a hand written Lindenberg weather research station log book. Photos of this very book and the relevant page are included in the second link below. Now, Guinness doesn't officially recognize this record due to its age, they say, but they do at least mention it, thanks to findings made and published in the last 40 years by researchers in Germany, the USA and elsewhere.

The stumbling block is probably corroboration. Recorded logs had not been published since the mid 1930s. Then, after the war the Communists allowed the disused weather station to literally weather away. Much was lost. Since then the only evidence to be found is in the handwritten log books—there's no independent verification. It has also been said that it wasn't clear whether or not there were more than one kite on some flights, especially the highest ones, but these are clearly noted in the documents. For example, on the same page as the record flight is an entry documenting a flight to 7,806 meters (25,610 feet, rounded down to 4 significent figures) where one additional "helpful kite" had been used. Bear in mind that the instruments used on the kites to record weather data were state-of-the-art. That was the era that witnessed the invention of quartz clocks, the first modern airliners, and early RADAR. Those figures are probably rock-solid—especially considering that the station's own 1919 readings (19 years older) have already been officially recognized. There may well be more records yet to be discovered, too.

PDF Download: Four photos showing excerpts from the "Aufstiegsverzeichnis" of 1937 to 1939 (documentation of the ascents made in Lindenberg); two pages, with the original 1938 entry in the middle of the last photo. (Author: Clauwer)

The "Schirmdrachen" (English: umbrella-kite) was a modified box kite with a totally different spar construction from previous box kites. The inner spars could be opened and closed like an umbrella to tighten the kite. The aft cell was equal or, in later versions, smaller than the front cell (like a Sauls, but much earlier). More information about this kite can be found in the book by W.Schmidt/W.Diem: Drachen mit Geschichte (in German only).

The following two color pictures were taken by Thomas-Michael Rudolph on an overcast "Day of the Open Door" at the observatory in Lindenberg.
These two pictures were previously published in FANG DEN WIND (club magazine of the Berlin Kite Club) no. 36 - 4/95.

The Grund kite at center was made by Werner Schmidt, partially with original parts. The electrically driven winch is mounted on four large ceramic insulators which are out of the picture here. (The insulators are more for static electricity than lightning. Huge static charges would build up during long, high altitude flights, easily enough to be fatal. (British Cody crews were required to wear heavy rubber boots at all times, after fatalities. Instead of insulators, Cody winches were grounded/earthed with heavy copper cables.) 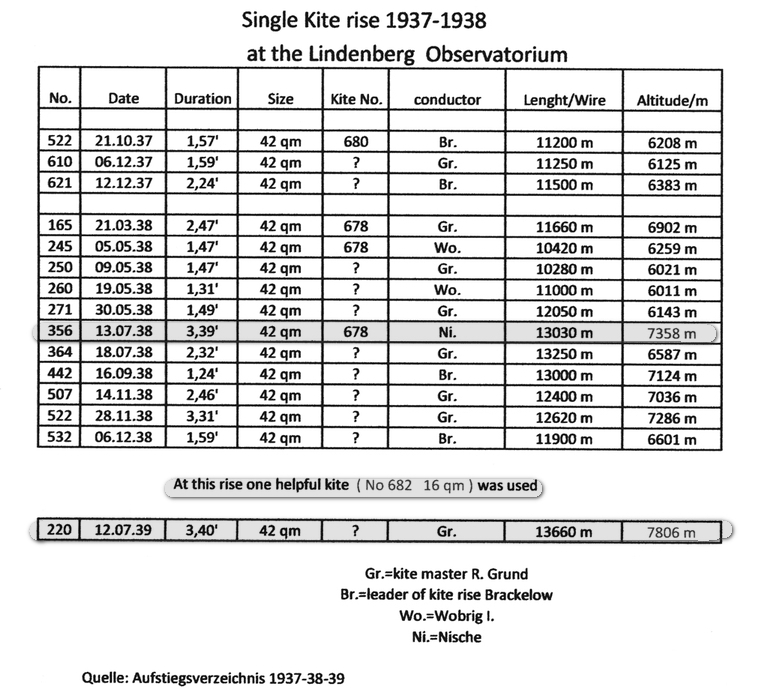