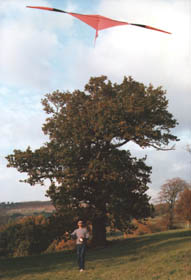 Personally, I just like to see how high I can get them in winds that seem to be too light for any kite to fly; that's why stunters with their short constant-length lines do not interest me. (They restrict you to X and Y but not Z - in other words, they're confined to a spherical surface at a constant radius, like wiper blades on a windshield, while single-line kites have the whole volume of a 3-D hemisphere of hugely variable radius.)

Kites are such deceptively simple structures it's easy to dismiss them out of hand. But it's surprising how good a good kite can be. The more one gets into them, the more one realizes that what's simple isn't necessarily easy.

Kites seem to defy logic. Their performance seems too good for such blatantly un-aerodynamic structures. This alone is a source of considerable fascination and wonder. Then there is the feedback one gets down the line in parallel with the visual tracking. It's a direct link to high air currents through several levels; each flight is a journey of exploration. Each flight is different. And the flyer is not merely a passive observer, either. The responsible flyer is in control at all times (or should be): letting out line; not letting out line; winding line in - to catch lift, turn, take out more line, move to another spot in search of a thermal - all done deliberately by the flyer in control. Kites are controlled by pulling in or letting out the line. With the right kite for the wind, and the right line, it's very relaxing and rewarding; some find it unexpectedly spiritual.

In the mid 1980s a nurse in the emergency department of a busy hospital in southern California contacted me about a study they'd done. This proved to be the most serious application of kite flying I'll ever encounter. Hospitals were losing emergency ward nursing staff to "stress-related staff burnout." In a move to combat these losses, the State of California began requiring all emergency ward nurses to take a certain number of hours of regular stress reduction therapy as a pre-condition for their biannual registration, which they had to pay for. As described to me, this was proving to be a considerable financial burden to the low-paid nursing staff. At the time, avatars in California were a huge growth industry, completely unregulated, and with no guarantees of success. Nursing staff at a hospital in southern California decided to do a study to find which, if any, of these were significantly more cost-effective.

They included flying kites in this study, and the study conclusively showed that for an equal number of hours, the most cost effective means of reducing stress was kite flying. It was also the best in terms of overall effectiveness, regardless of cost. (Transcendental meditation came a distant second - concentration being the main factor in any meditative technique.) Read the actual letters, in full and unedited.

Of course, if the kite doesn't fly properly, the opposite can happen. It can lead to adults showing signs of intense frustration in public. There are unfortunately no certificates of airworthiness for kites, and it's well nigh impossible to tell one that flies from one that doesn't. Some beautifully crafted kites can be poor flyers. Whatever type of kite you like, it's wise to find a good kite-maker who's top priority is kites that are each made as if they were his own, and not just mass produced to sell. Fortunately, there are a few such kite makers around - Martyn Lawrence (Wales) for fighters, Bobby Stanfield (USA) for boxes, Ed and Bonny Wright (USA) for parafoils, Reza Ragheb (USA) for big fancy kites, Thorsten Schact (Denmark), Jan Pieter Kuil (Holland), Maurizio Angeletti; to name but a few. There are plenty of others. Kite making is a vocation; please give your favorite kite makers your support.

There are places on Earth where the air almost crackles, it's so full of electricity at certain times of the year. Needless to say, it would not be prudent to put a kite up with lightning in the vicinity. In the event of a strike a kite line would be vaporized within nanoseconds, but that doesn't mean an unprotected flyer would escape. The electric shock hits first, at the speed of light, well before the line has vaporized. Fortunately, pocket lightning meters are now available; these detect atmospheric electrical discharges for up to 40 miles, with the warning signals changing as the danger gets closer. 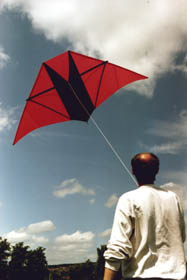 Everyone is aware of the danger posed by prolonged exposure to the sun. Take the usual steps to protect oneself, but note also that while kite flying the front of the neck and face won't be covered by a wide-brimmed hat and will get a lot more exposure than usual, especially if the wind is such that you're looking more or less directly into the sun all day. 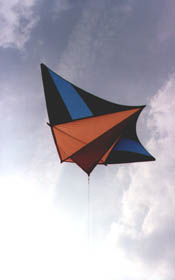 Line burns to fingers are common when kite flying, especially with big kites flown in what turns out to be more wind than expected (the kite at left is over 15 feet across). The obvious solution is gloves, though even leather gloves can be cut by line slipping through hard and fast. Flying line cut across Bev's nose once when my line suddenly went taut, and I didn't react quickly enough.

But generally kite flying is as safe as can be expected. Bystanders are probably more at risk of being clunked by diving kites in inexperienced hands than the flyers ever will be, but after long hours of high-angle kite flying with the head held back virtually as far as it can go, flyers may experience a degree of aching in the neck.

Beyond that, there is one potential long-term problem that could (hypothetically) apply to flyers who frequently fly efficient kites to very steep angles for many hours at a stretch, perhaps losing track of the time.

When the blood flow to the brain is partly restricted (by the head being held back) for an extended period of time, so the theory goes, an induced temporary amnesia, called Transient Global Amnesia, abbreviated TGA, can occur. It is rare, but I do know of one case in connection with competion swimming, and after speaking with the husband of the lady concerned, it wouldn't surprise me if the same thing could also happen to a kite flyer, because once, years ago, it happened to me at a week-long kite festival. 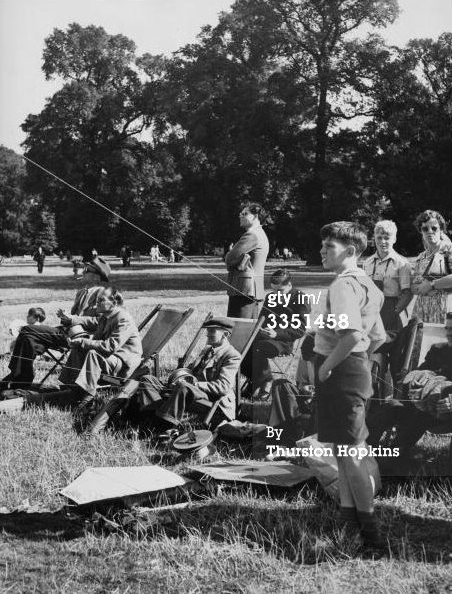 ...Or from a deck chair.
Home - Contents - Catalogs - Falconers section
Top of page