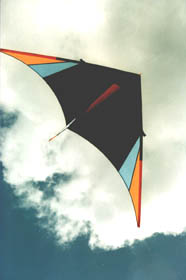 This is the kind of path a delta might trace on a typical flight. As each day and each flight is different, it isn't meant to be a set of instructions, but rather an illustration of some of the maneuvers that make delta flying interesting.

Any flight has two primary phases: the way up and the way down. The illustration starts with a "long launch," which is only necessary on days without sufficient ground wind. Since there may not be enough wind in the region immediately overhead on the first climb, it is essential not to reel the kite to too steep an angle on the initial climb (A), because at too steep an angle in dead air the kite will be impossible to control.

Also, it is possible to encounter too much wind up there for a delta, and it could get into trouble, and possibly even damaged. So, stop reeling with the kite still at a relatively low angle, test the wind, and if there is some, allow the kite to turn downwind taking out line without losing much height. After a few of these short climbs followed by taking out line (B), the kite may be in enough wind for a decent climb, either on its own or with some reeling (C). Don't simply hold the reel locked during a climb if there is enough wind to over-stress the kite. Apply drag to the reel instead, so the kite flies smoothly. At the beginning of a climb a kite is at an unnaturally high angle of attack where the force of the wind hits it full on the front. Deltas fly lying flat on the wind. This is a dangerous stage in the flight - if there's too much wind and line is going out fast, the situation can get worse. As a precaution, put up a small kite with fresh wind capability first to test the winds higher up. Usually, with experience, you can judge the wind on any given day, but in areas where the winds can be fluky, it's best to have a selection of kites for different winds, and start with one for the strongest.

If the day's good, the main climb will be a long gentle one, with the possibility of encountering some other winds along the way, possibly with a change of direction, enabling some more line to be taken out (D). Or, your kite might encounter some thermals and give you a real thrill as it rides the rising air until it's almost out of sight. The smaller the kite, the higher it'll look. Small deltas are just as capable as bigger ones; in fact, since they're more responsive, more tolerant to gusts, and generally have lighter wing loadings, they're able to virtually disappear. Big, spectacular kites as seen in magazines and at kite festivals are for show, not for flying. Most of them hardly fly at all, but the end result of the publicity is that people tend these days to ignore the really capable smaller kites. 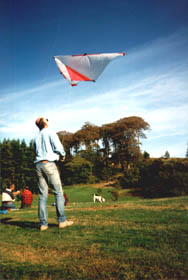 From (E) we enter phase two of the flight: coming down. If you carry on reeling, the kite will continue going forward, again because of the reeling motion added to the relative wind. It can fly beyond the vertical (F) - this is sometimes referred to as "over-flying." (see below). When a delta is high enough this isn't a problem; you stop, let it turn around, fly downwind, and turn back again; then you can continue - but more slowly. As it approaches the ground winds, it may tend to fly too far forward no matter how slowly you reel, and you'll have to stop and start. Let it drop down wind and bring it in at a low angle (G), or let it settle to the ground in a flat mush.

"Over-flying" is flying beyond the vertical, usually when kites are being brought down. Even kites with long draggy tails can be induced to over-fly, especially in a light wind. It isn't a fault; it just depends on how fast the line's wound in. Low drag, high angle flyers are readily flown beyond the vertical. What's important is that they continue flying and remain controllable. 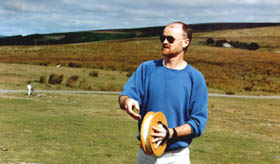 Nearly everyone knows that to make kites go up if there isn't enough wind they have to run with them. Sophisticated kite flyers generate wind by winching their kites up with reels - an assistant dutifully takes the kite some distance downwind, holds it for the launch, and it climbs when the flyer reels. But later, when it's being wound down, it may fly beyond the vertical. It's doing the same thing it did when launched, but at a different angle of elevation: it's going forward when pulled. At launch, kites go up when winched, because they move forward (not necessarily up) whenever the line is pulled. They only go up if they're pointing up - they can also go sideways or down. Since beginners commonly associate "pull on line" with "kite goes up" (instead of "forward"), a common mistake is panic jerking on the line when a kite turns downwards to one side. Instead of going up as intended, this causes the kite to go down even faster. If a kite swoops or loops during launch or landing, the skill to master is this: stop or reverse reeling momentarily and let the kite right itself before further winding. This technique also applies to over-flying: after an over-fly, stop reeling, allow the kite to turn, coax it downwind with the reel, stop, let it turn forward again, and so on. The basic fundamental of kite control is the release followed by a well-timed pull.