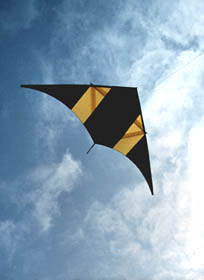 Note on the Use of Wood

I grew up in the shade of pines and with the smell of sawdust (my father is a carpenter, a builder). I love wood.

In the town where we lived, the local movie theater used to put on special matinees for kids in conjunction with the local dairy. Admission was three milk carton tops, and if you saved up lots, you could bid for prizes during the intermission. (Whatever happened to the double feature?) Anyway, one time the cartoon was about the birth and growth of a huge forest tree. This magnificent tree was finally chopped down and hauled on an epic journey to a lumber mill, where a lot of buzzing ensued and mountains of sawdust produced, with the final punchline showing the end result: a single gleaming toothpick.

Kite designer Mike Pavlov visited a Ramin dowel mill where he witnessed firsthand that that cartoon wasn't so far from the truth - the making of doweling is a hugely wasteful process, producing mountains of sawdust for what seemed to him relatively few dowels. These days sawdust isn't wasted like it was - they used to just burn it. Where I grew up the sawmills had huge screened sawdust burners which were specatular to watch at night with their outpouring showers of glowing sparks, but these are no longer in use.

When I started making kites in London, the kite frames were all wood, and the experienced old-timers where I flew recommended Ramin dowels, warning me to watch out for what they referred to as "bastard African hardwoods." Ramin dowels were indeed very fine - straight grained and strong - and they came in lengths of up to 16 feet (if you knew where to go). The first delta "secret" I discovered was that if the two wing spars didn't match, if one was bendier than the other, the effect on a delta kite was the same as the Wright brothers' wing warping. It turned the kite, or caused it to fly cock-eyed. The wing spars had to match perfectly (in flexibility) for straight and true flying. Hence I made each pair of wing spars from a single length of dowel. This helped, but even the matched spar pairs varied in flex, so that within a batch of, say, six kites, there would be one with quite stiff spars, a few intermediate ones, and one or two borderline soft. This meant that within each batch the kites had slightly different flying characteristics.

A few years later, a friend who was a wood-worker at the time had borrowed a book from the library on woods of the world. I casually looked up Ramin, to see if it was in there. It was, and that's when I got my first shock (this was in 1980). I discovered that the Ramin was a huge tropical hardwood, which took 2 to 300 years to mature. They grew mainly on the islands of Borneo and Sumatra. The book said that at the rate they were being cut down, they would all be gone in 15 to 20 years. That was over 20 years ago, however, and times have changed for the better. I have been assured by a Malaysian journalist that Malaysian commercial timber forests are now properly managed using modern afforestation techniques as developed by the Forest Research Insitute of Malaysia. I hope this means they are achieving sustainability (I simply have no way of knowing for sure).

Anyway, prior to that revelation I had experimented with some of the new pultruded fiberglass that was beginning to appear at the time. It was not ideal; it was dense, heavy, and too flexible. But it had the great advantage of being more uniform in flexing. For this reason I went on to develop my first deltas with fiberglass wing spars. This would mean less time spent hand-matching wing spars, though I still match the natural curvatures of fiberglass and carbon ones.

It wasn't easy for me to relate to the extra flex and weight of the fiberglass spars, and it took a fairly intensive 6 months to develop my first good fiberglass delta. It was the "Wycombe Delta," (the latest version of which is the Khatib with a less-radical scallop) and it began with a wood-sparred version, which was later converted to fiberglass. It shows its age by using an older set of proportions with relatively longer wing spars and a short spreader mounted closer to the nose. That was followed by the Drifter (called rather unimaginatively the Fringed Delta by the Wycombe Kite Company) which used my "standard" set of proportions, which was worked out on a series of experimental prototypes for this kite. The fringe, by the way, is not for looks. It prevents spinning. As deltas get smaller and smaller, they really don't need such thick cloth, but that can't be helped. The weight of ordinary spinnaker cloth is proportionally larger for small kites (compared to their frames), with the penalty that once the small kite starts to spin, because it's small the aerodynamic forces that would otherwise correct it aren't enough to overcome the relatively high momentum, which tends to keep the kite moving once it's started and so it carries on spinning. The fringed trailing edge gives those too-small aerodynamic forces a boost. Added together, the strips of fringe equal a substantial streamer tail and serve a similar purpose. Scaled up to fit the next larger diameter of fiberglass, these same designs lose their need for fringes, and a straight trailing edge does the job, resulting in a group of kites for delta purists. They have the true, purely "delta" geometry without any extra drag penalty. The Burrito is the same design as the Drifter, but it flies without the fringe. Above this size, I usually prefer to scallop the trailing edges, since the extra drag, while providing extra stability, hampers the handling of the kite in the quest for lift.

I began changing old designs, redesigning and rescaling them for fiberglass wing spars.

I tried to import Glasforms filament-wound epoxy tubing, but they wouldn't supply me unless I ordered impossibly huge quantities.

By the mid 1980s I began substituting carbon for the wood wing spars in larger deltas, where fiberglass proved too heavy and bendy. This wasn't as straightforward as one might think, because it led to bizarre flying quirks the likes of which I'd never before experienced. But I've managed a few good ones.

The final part of the conversion process - from wood spreaders to carbon - has been the slowest. It's been hampered primarily by two facts: one is the paucity of available stock sizes to choose from, and the second is the higher unit cost. I have been offering carbon spreaders as options for quite a few years now, but had no takers. It wasn't until a few falconers asked for them that I actually made some. Meanwhile, I found that, if they had carbon spreaders, Clippers were much better at withstanding gusts without diving. So, these now are only available with carbon spreaders. I will be doing the same with the CC345 in the near future, but for a different reason. The 11mm dowels I currently use are rare and expensive, and there are a lot of "soft" ones, or ones with irregular grain.

I love working with wood. It's a lot easier to use for kites than carbon. It's easier to cut to fit and finish off, and it won't cut through the ends of sleeves or get stuck inside. You can seal it or varnish it and make it look lovely.

Dowel production wherever it may be is very wasteful, and I wish there were more alternatives in Britain.

I shall continue to supply kites with carbon options to anyone who wants them, and will continue testing and converting my designs to manmade materials. 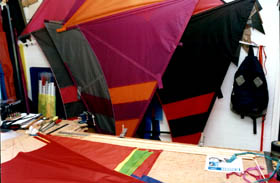 The kites hanging up have carbon wing spars; the ones on the table fiberglass. The spreaders and spines are wood. To conserve precious wood, spreader dowels are chosen for their stiffness, and the rest are used for spines.