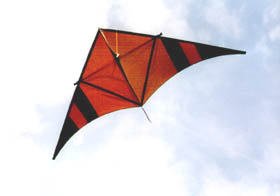 Some Tips for Light Wind Flying

I was fortunate to learn kite flying within a small group of experienced flyers and so was able to learn by watching as well as by doing. Though individual techniques varied, what follows below is a short summary of some of the things learned through years of practice.

Unlike fresh breeze flying, where all you have to do is hang on, light wind flying involves a lot of turning, winding in and letting out line, downwind and side-to-side flying. Some people are better at kite flying than others, but experience always helps. Practice letting kites fall back; practice turning them. Get a feel for how to control them after a stall. You need to be able to recover from dives, which may involve controlling a kite through a semi-slack line.

This drawing illustrates some of the conditions that might be encountered on a typical delta day with no strong winds. There may be a ground wind layer - letting out line merely results in the kite drifting downwind without climbing (A). If the ground wind layer is thick enough, you can reel in and fly the top of it (B) - it's like a river of air, with the kite riding the surface. Your best flying angle will show its thickness. With luck, it'll be a few hundred feet thick, but if it's too shallow, and you want to try to get higher, use it to float the kite downwind, taking out as much line as possible, then reel in to make the kite climb.

With enough line out you might catch a steady wind above the "dead zone." As the depth of a dead zone can also vary, this may take more than one attempt. Fortunately, unlike rigid kites whose flight is strictly two dimensional - up and down only - deltas can be flown sideways across currents of air. You can use their steering ability to your advantage, and hunt for lift over wide sweeps of sky. It's kite flying unchained, and it's easy to learn.

Some flyers are afraid to allow a kite to tip even slightly from the horizontal, fearful that it will dive. This isn't the case. Turns are a fundamental part of the delta's handling armory. Properly designed kites are not just statically stable - they are also dynamically stable, which means they automatically recover when upset or tilted, as long as they have enough sky and enough line (all kites are less stable on short line), and are not overpowered by a freak gust or too-strong wind. Small kites are better than big ones when it comes to turning-circles.

Over the width of a dead zone there is no appreciable drag on the flying line, which results in incredibly steep flying angles once above it. There is also a danger - flying up into a layer of wind that's too strong - so you have to be careful. 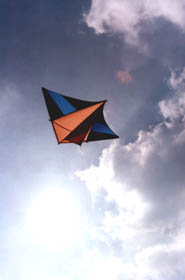 Of course there may be no dead zone; there can also be several layers of wind. Sometimes the wind changes direction as the kite goes higher. At other times the wind is virtually constant from ground level to as high as a kite can fly.

On some days, when the wind is otherwise virtually nil - no ground wind - it is possible to catch rising columns of air, or thermals, by using a "long launch," where the kite is held or propped up some distance downwind and reeled up. Such updrafts may not be centred over your head, so you have to move under them. They can be very strong and carry kites very high - it's wise to use heavier (stronger) line for thermalling with potentially powerful kites. Kites can also drop off thermals rather dramatically, and rapidly fall in any direction, with line falling all about. To maintain line tension and regain control of the kite, try giving the reel a series of spins, guiding the line on with your hand to take up the slack.

What if the kite stalls in a dead zone?

If the kite's been accelerated into a dead zone it may stall after the climb.

Kites go up as you wind in line (or run upwind), but if you drag them too far too fast, into and through dead air they can find themselves stranded with nothing to hold them up. Then if the line goes slack you lose control, followed by a stall. If control is not regained soon, a dive could end in disaster.

You might lighten a kite by using a lighter frame, but you can't change the wind. You have to choose the right kite for the wind. If the kite seems right, then try a very long launch to get the kite through the dead zone and into a higher layer of wind (which may or may not exist). If that doesn't work, slow down the climb (slow down the winding) before reaching the dead zone, cautiously feeling out the top of the layer of wind, being careful not to climb too high where there's not enough lift (where the kite stalls and the line goes slack). Once riding the surface of the wind layer, letting out line sends the kite drifting downwind. You can then wind in carefully to find the best angle, where the kite will sit comfortably with a minimum of "belly" in the line.

Alternatively, experienced kite flyers wishing to get higher will let the kite drift downwind, taking out as much line as possible, then vigorously wind in, attempting to climb above the dead zone (or into a thermal). This can take several attempts, with a satisfactory outcome by no means guaranteed. Between attempts, control of the kite will be maintained at all times; it will be turned downwind intentionally to resume its standby position.

Experienced kite flyers carry a bag of different kites for different winds (that's how we make it look easy). Faced with a howler at ground level with a dead zone above, the risks have to be weighed. It's never a good idea to risk losing control of or damaging a light wind kite. (I've seen people hurt by out-of-control kites, when inexperienced flyers pulled when they should have let out.)

A light frame in a fresh wind kite is one option. Using heavier line is another; it stabilizes the kite+line as a system. A tail may help prevent a mishap, but it's still got to be on the right kite. With the right frame, an original-type delta with trailing edge apron could be good.

Recap:
The reason why you want to approach the zenith with caution is that if the kite zooms up too far too fast, and finds itself in a dead zone, then stalls, the line goes very slack and may even fall all around you faster than you can wind it in. But you have to take up the slack, so you can regain control before the kite goes into a dive. You need to be able to coax the kite into a downwind turn, back to the layer of wind, where it can be turned back around once again facing the wind.

It's axiomatic that light wind flying requires the very lightest flying line possible. The weight of line has to be balanced with the risk of loss, should the kite pick up a powerful thermal or an unexpectedly strong layer of wind.

High-tech lines made from aramid or coramid fibers such as Spectra, Dyneema, and Kevlar, offer very high strength, low drag, low stretch, and very light weight, and are supreme for light winds. They're also not bad for strong winds, either, giving steeper flying angles thanks to their thin profile. They need care, though, because they can really cut. And they can be a nuisance when they need field repairs, because they require sleeving at knots to prevent them from cutting through themselves - strong as they are, all their strength is in tension. In knots, where there is a cutting action as pressure is put on the knots, they have little resistance and will cut right through themselves. Hence the sleeving kits sold along with these lines. The best compromise, in my opinion, would be a dacron braid with a Dyneema-type core.